From a real body, which was there, proceed radiations which ultimately touch me, who am here; the duration of the transmission is insignificant; the photograph of the missing being...will touch me like the delayed rays of a star.
Roland Barthes
We are spatial beings; bodies in space. Our imaginings of space are informed by our spatial experiences here on earth. Our bodies have been intimate with earth; we understand it in profound ways. How will the human experience of outer space evolve as we venture further into new space, different space...a space we can only imagine?
Jane + Louise Wilson dwell on a secret ‘space space’; the abandoned power structures and apparatus of an early space training ground, Star City, USSR. Kristina Estell attempts to bridge a distance and place that is beyond human comprehension and suggests an intuitive way to comprehend the most remote of our human-made assemblages, Voyager One. David Bowen sets up robotic bodies programmed to track aging parts from other junked machine bodies. In Sunlight, Elizabeth Price suggests an ongoing history of power emanating from our singular, solar body and its affect on the female body in space.
All the works monitor bodies in space. They monitor the passing of time and the recording of great distances. Recalling places, objects and times that are gone or tied to us now by the most tenuous of threads...absent, abandoned or existing only in memory. The works suggest a repetition of recorded histories and traditional power structures. They remind us that once there was a race for space.

SPACEJUNK consists of five robotic figures that trace the path of the oldest piece of space junk circling overhead. There are over 500,000 pieces of junk out there, each traveling at speeds of up to 17,500 mph. In real time, the robotic figures move together when they detect the signal. Carrying rough sticks, like some sort of divining rod, they point and track in mechanical unison. We are made aware of a physical reality; of something out there, and the nature and location of that body, through the actions of these robots.

Sunlight by 2012 Turner Prize winner Elizabeth Price (UK) is a 2-channel video installation that incorporates thousands of glass plate negatives of the sun. Taken on a daily basis between 1875 and 1945 they are some of the earliest scientific solar images and were discovered by the artist at the Rutherford Appleton Laboratory during a residency with Dr. Hugh Mortimer, 'Space Scientist'. The work traces and connects the paths and attitudes of celestial and human bodies. Female figures appear frozen in negative ; arms raised as if to shield their eyes from the dominant solar gaze. A nostalgic 1978 soundtrack seduces as the work expresses an excess of power. 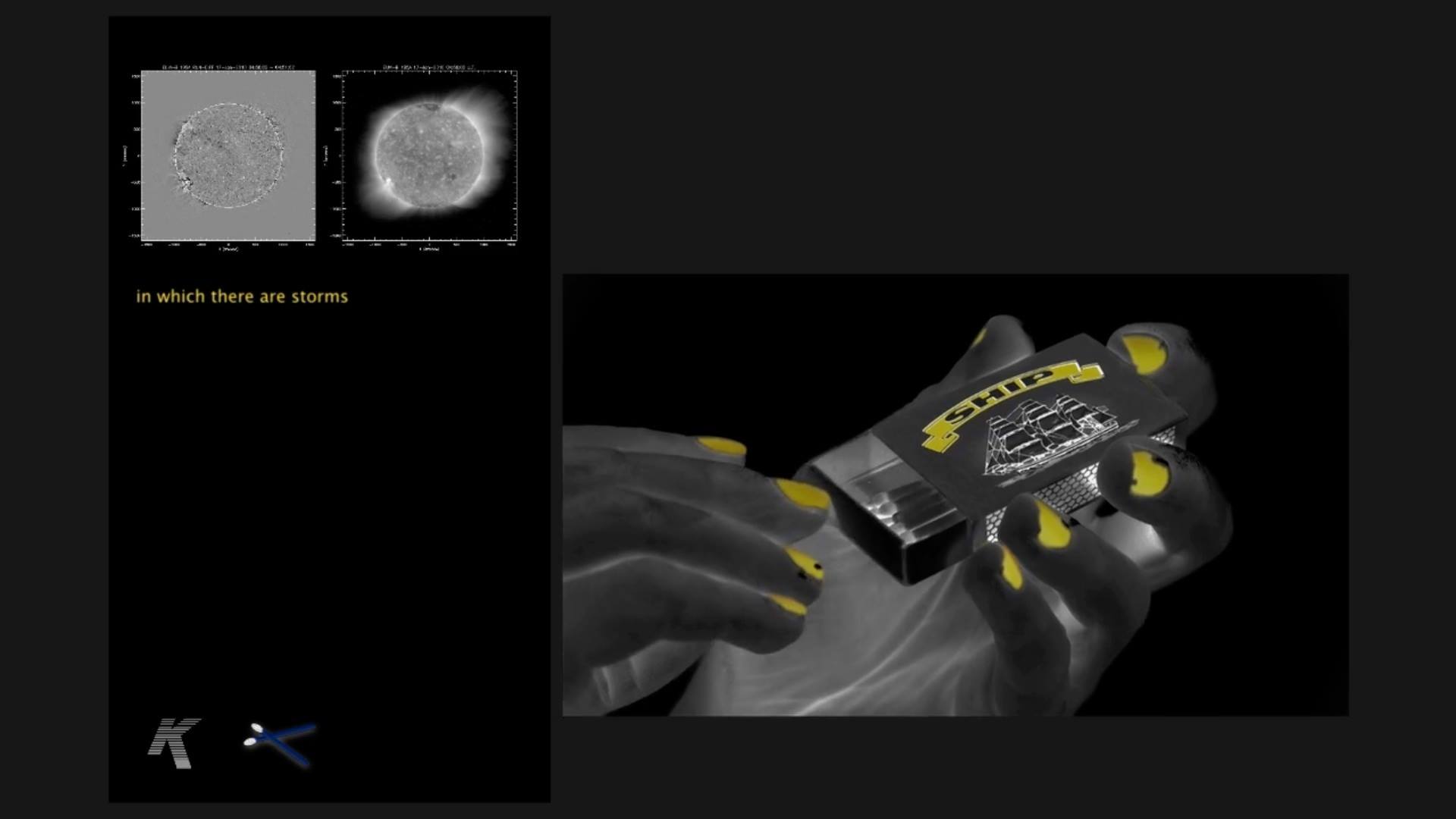 Elizabeth Price works in contemporary moving image and video installation. She studied at the Ruskin School of Drawing & Fine Art and the Royal College of Art before completing a PhD in Fine Art at the University of Leeds in 1998. Since then she has taught at Kingston University, Goldsmiths College and the Royal College of Art. She is a former member of the indie pop band Talulah Gosh. Elizabeth Price has had solo exhibitions at Walker Art Centre, Kunsthalle , Musee d’art Contemporain, The Baltic, The New Museum, Winterthur, Museum fur Naturkunde, Tate Britain, BFI Southbank, Whitechapel Art Gallery, Chisenhale, Bloomberg SPACE and Frieze Art Fair. She has participated in group exhibitions at Hayward Gallery, Centre Pompidou, Modern Art Oxford, Centre for Contemporary Art Prague, Contemporary Art Museum Kumamoto, Art Basel, Whitechapel Gallery, IKON to name a few. She was nominated for Film London's Jarman Award in 2011. In 2012 she won the Turner Prize. She lives and works in London

voyager one A collaborative project by Kristina Estell (USA) and David Bowen (USA). The work traces the path of the Voyager One space probe, attempting to create a physical sensory link between this incredibly remote probe and us. Launched in 1977, the probe entered extra terrestrial space in 1990. As it travels to the extremes, our understanding of location and cosmic borders loses any tangible connection to our spatial reality. The single LED device produces a color output based on custom designed software uses Voyager’s real-time distance from the earth and the sun. It simultaneously calculates the distance from the sun and the earth using all of this information to triangulate Voyager One’s location A simple pin-point of shifting, colored light in a very dark void. 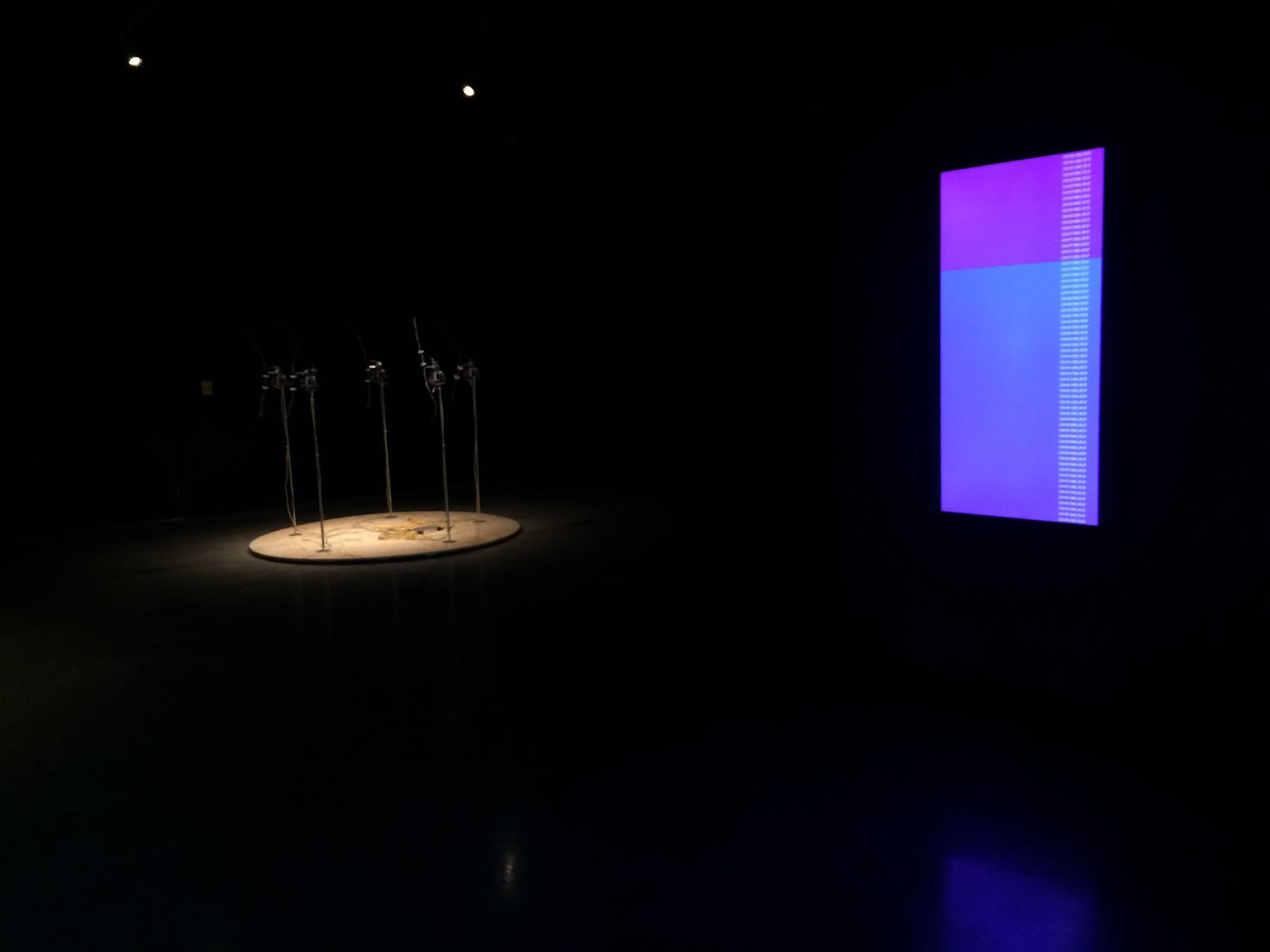 Kristina Estell studied at the Herron School of Art and has an MFA in sculpture from University of Minnesota. She also studied at the Haystack Mountain School of Craft on Deer Island. Her work often evokes the gestures and forms of nature rather than offering a direct representation of the natural world; using nature as a medium rather than a subject. She has exhibited in the United States, including solo exhibitions at Pivot Art + Culture, Johnson Gallery, Mn, MAEP Gallery, Mn, Akademie Schloss Solitude, Stuttgart. Estell lives and works in Minneapolis.

Star City, a 4-channel video installation, by Turner Prize nominees Jane & Louise Wilson (UK) is the earliest work. The Yuri Gagarin Cosmonaut Training Centre (or ‘closed military townlet #1), is a place where cosmonauts have lived and trained since the 1960’s. The searching camera pans and kaleidoscopes across abandoned space pads and control rooms, entering once forbidden territories. The implications and results of this historic 'space space' are parsed in rich detail. 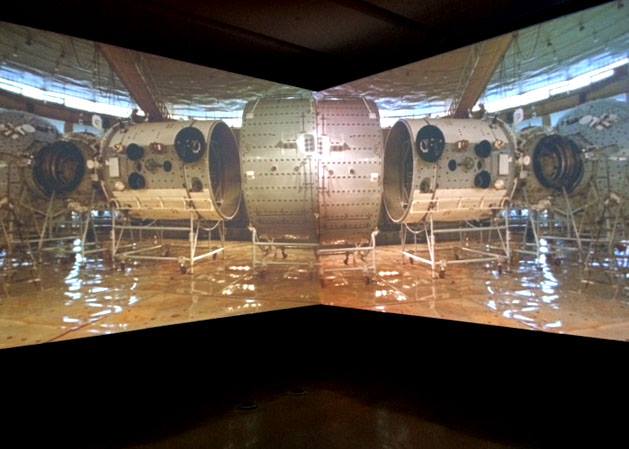 Jane and Louise Wilson were born in Newcastle-upon-Tyne, England. Jane studied art at Newcastle Polytechnic and Louise studied at Duncan of Jordanstone College of Art & Design in Dundee. From that point they began to collaborate. They both received MA degrees from Goldsmiths College in London.
Early work comprised photographs and films of performances. In 1997 their work took a more political turn with Stasi City, a four- screen video projection filmed at the former Stasi police headquarters in East Berlin. Since that project, their work has explored Modernism and its ambitions through specific historical sites including Star City.
Solo exhibitions include Centre d’Art Contemporain in Geneva, Kunsthalle Hamburg, Tate, London, Kunst-Werke Berlin, Baltic Centre for Contemporary Art, UK, Bergen Art Museum, Norway. International group shows include, Carnegie International, Korean Biennial, Istanbul Biennial, Guggenheim Bilbao, Kunsthaus Bregenz, Austria, MOMA, New York. They have been shortlisted for the Turner Prize. They live and work in London.