Collectively, the artists in this exhibition ponder the ambiguous, fluctuating and relative nature of currency and its relationship with value. We are given opportunities to reflect on the meaning of currency and consider what conditions will affect value: external influences such as markets & trading, or socio-political influences such as historic or group consensus, issues associated with human labour or new collective forms of currency, or the systematic ways in which luxury goods such as precious stones, perfume, real estate or historic art can accumulate and reflect value systems.
Using artificial intelligence, internet streaming, diagnostic gas chromatography, block chain, bitsoil and bot systems these artists have produced intelligent, evocative works of great complexity and depth.

Here a personal, luxury product reflects a historic moment of currency. On 6 May, 2010, a huge flash crash hit the U.S. financial market, burning through a trillion dollars in 36 minutes then rebounding. It has been described as one of the most turbulent periods in the history of financial markets. Housed under a glass dome, a perfume created by the artist reflects this catastrophic, 36 minute event. The fragrance was created by analysing data spikes from the flash crash through gas chromatography. GC is used extensively in forensic science to detect criminal evidence; separating, analysing, quantifying and identifying the volatile components of any mixture. The ethereal notes of fragrance notes echo the volatile spikes and financial anomalies of May 6, 2010.

Born in Rome, he studied Arts and Computational Technologies from Goldsmiths (MFA) and at Central Saint Martins, London, and CCA, Rome(MA).  His research-based and often collaborative process incorporates coded surfaces and data-informed structures to investigate the constant act of negotiation with information systems. Through mixed media, text and interactive installations he considers notions of value, the language of power and the effects of corporate systems on the belief system of the individual. Antinori was selected for the PS1 Summer School, New York, in 2012 to study with Marina Abramović, Kaunas Biennial, Lithuania. Recent exhibitions include solo shows with East London Printmakers, Arebyte Gallery. Brun Fine Art, The MoCA Shanghai Pavilion. Group exhibitions include The Hangzhou Triennial of Fiber Arts, Watermans Arts Centre, Pi Artworks. The Florence Trust Summer Show, Victoria & Albert Museum, London and Beers.Lambert Contemporary. Antinori lives and works in London.

An interactive, internet-based work that is a digital campaign with online and offline activity. It consists of multiple interactions between trolling social media bots on Twitter, in combination with an offline interactive installation functioning as a tool designed to restore fair balance to a digital economy known for its tendencies to concentrate wealth in the hands of a few big tech companies. The campaign claims a tax on user data collected by tax collector bots who mine data produced by Twitter users. As the bots interact with the Twitter user, a tweet with video pops up on the user’s account and redirects her to the online platform of the campaign. As the user joins the campaign, she chooses from several actions which will result in the redistribution of wealth and the promotion of fair value. 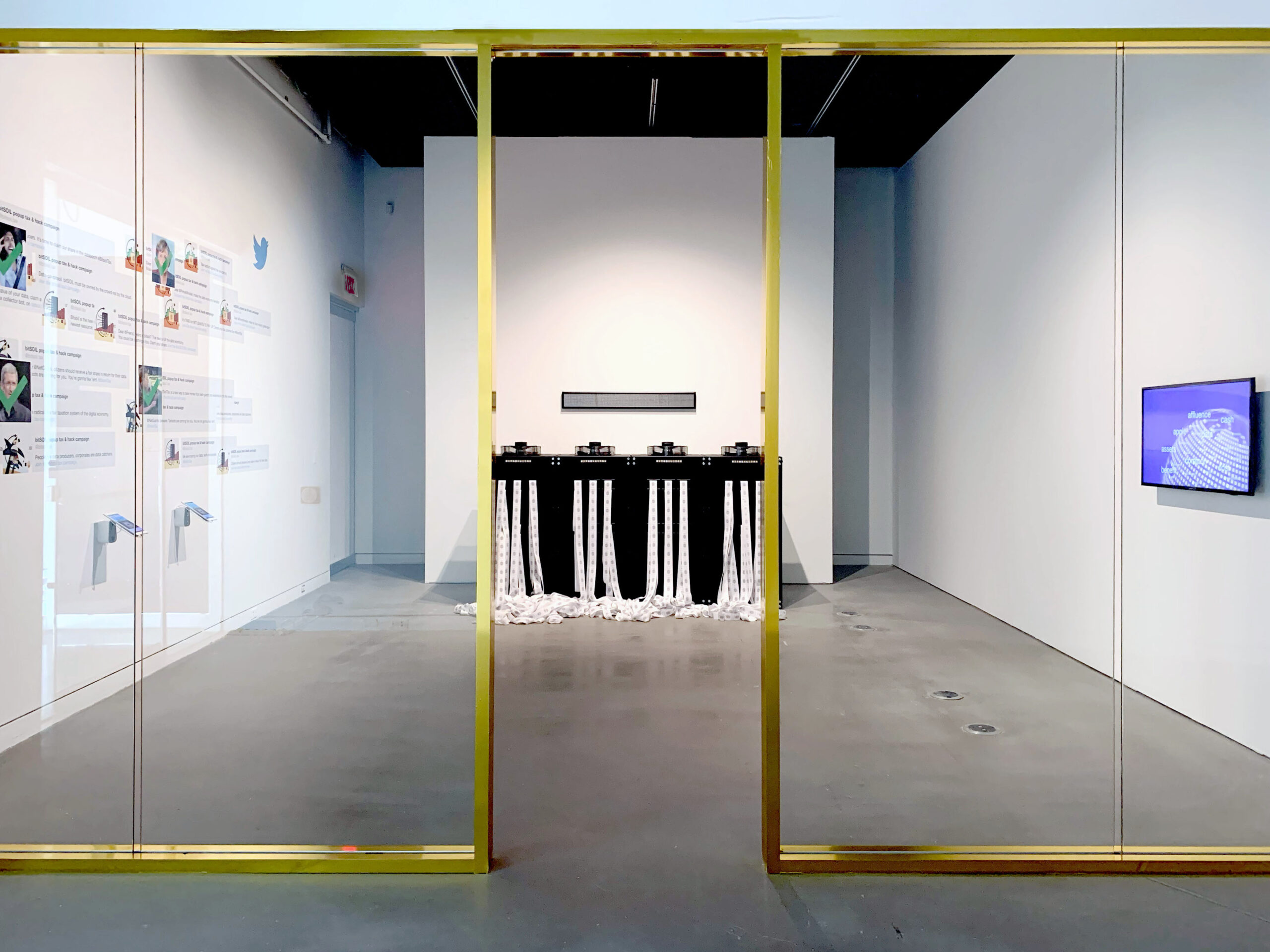 The work of the Brussels-based artist duo LarbitsSisters (BE) is situated at the crossroads of art, technology, political, and societal issues and grew out of a shared fascination on new media, merging research and artistic practice onto projects in which concepts such as traceability, network analysis, algorithms, automation, and data processing are explored. LarbitsSisters’ work focuses on the creative drives and patterns in digital media. Central is the friction between public and private, online and offline; between the unbridled faith in technological progress and everyday life. Their work has been presented in several national and international exhibitions and symposia. In 2011 LarbitsSisters founded the Research lab on Digital Visualizations, Larbitslab. Larbitslab brings together artists and scientists around societal issue of networked societies. The specificity of Larbitslab lies in the methodological approach, which combines observing practices, media analysis, and research on technical and societal implications. Comprising social media researcher Bénédicte Jacobs and media artist Laure-Anne Jacobs, LarbitsSisters has won the NOVA New Media Interactive Art Prize and the Prix Ars Electronica Golden Nica.

A triptych combining a single dreamlike tracking shot, together with symbols of modern consumerism, financial and surveillance systems and apocalyptic narratives. Visually extravagant, this neo-baroque work re-imagines iconic imagery such as the seveneyed lamb, the four horsemen of the apocalypse and rarified, design. Present day anxieties are recognized, subverted and adorned with security cameras, riot gear and consumer electronics. Glossy surfaces, luxury materials and consumer products float through a heavenly sky with seductive and uncanny familiarity. 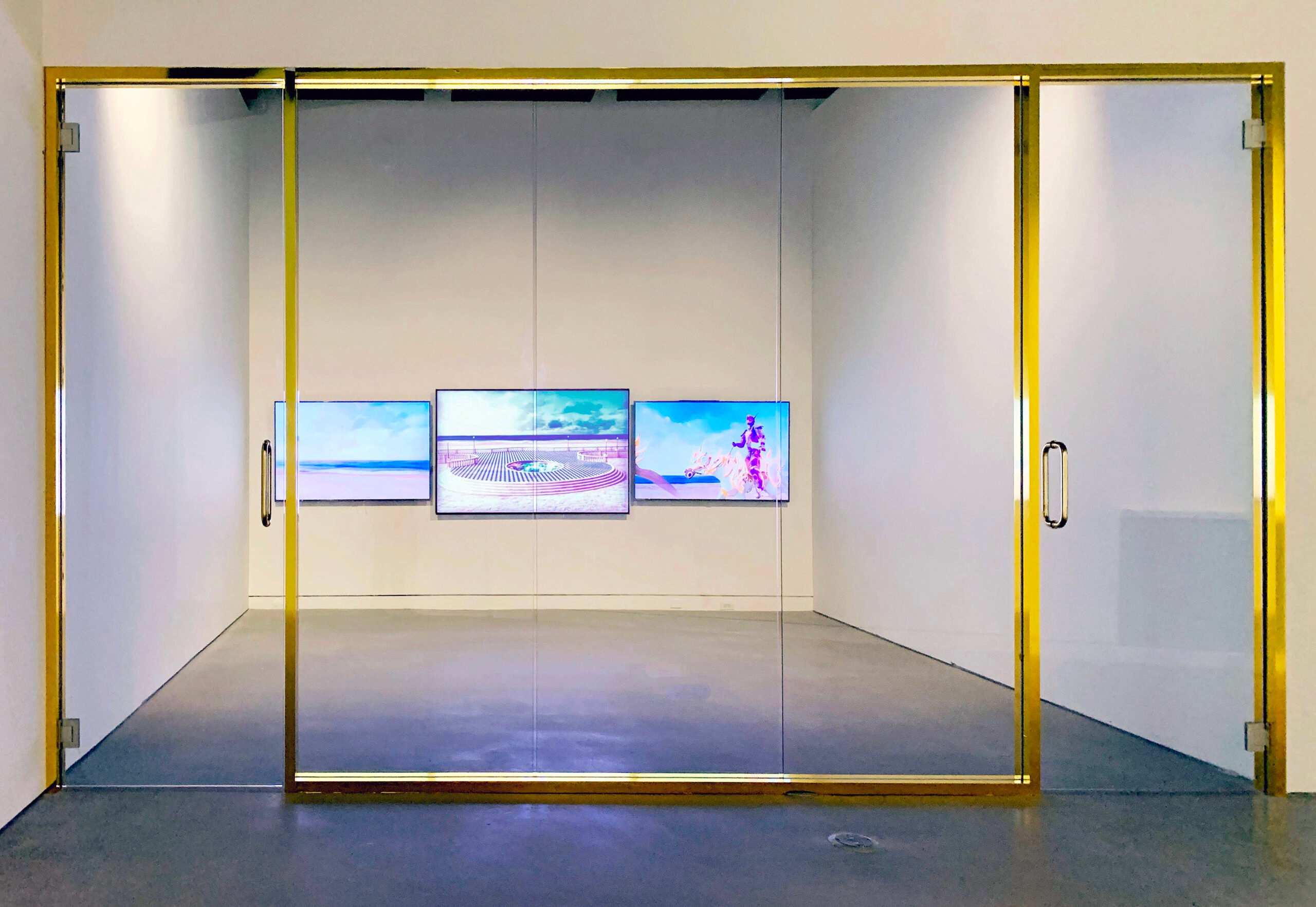 Jonathan Monaghan is an American computer animator and artist, born in New York.  He attended New York Institute of Technology (BFA), and the University of Maryland (MFA). He works across a range of media, including prints, sculpture and computer animated video, to produce otherworldly objects and narratives. Drawing on wide-ranging sources, such as historical artworks and science fiction, his highly-crafted and fantastical pieces uncover subconscious anxieties associated with technology and consumerism. Past exhibitions include The Sundance Film Festival, The Hermitage Museum in Saint Petersburg, The Frist Art Museum in Nashville, and The Palais de Tokyo in Paris. His work has been featured in several media outlets including The New York Times, Vogue, BOMB Magazine, The Washington Post, and The Village Voice. He lives and works in Washington D.C. and is represented by bit forms gallery in New York.

Animal Spirits is a portrait of the key personalities involved in the 2010 Global Financial Crisis. The installation comprises twelve international figures discussing free-market, economic theory. Sound and language are manipulated in an endless loop. The artist explores narratives and mythologies related to currency and power. Animal Spirits was a term coined by British economist, John Maynard Keynes, to describe how people arrive at financial decisions, including the practice of buying and selling securities at times of economic stress or uncertainty.

Daniel McKewen is a Brisbane-based artist whose practice investigates the intersections of contemporary art popular culture economics politics and screen-based mass media. Working appropriatively across a range of media including video installation his work creatively and speculatively examines how the formal and symbolic conventions of these institutionalised structures operate culturally and politically. The resulting artworks explore and express how our subjective and inter-subjective interactions with these structures can allow us to make sense of our own social experiences.In 2013 Daniel was awarded his Doctorate of Philosophy from Queensland University of Technology for his thesis The Art of Being a Fan: Complicity and Criticality in Contemporary Art and Fandom. His artwork is held in private collections and has been exhibited nationally and internationally including in NEW14 at the Australian Centre for Contemporary Art and You Imagine What You Desire at the 19th Biennale of Sydney. Daniel is currently a Lecturer in Media Arts at QUT and is also a founding board member of Boxcopy a Brisbane-based artist run initiative which provides exhibition opportunities and support for emerging artists writers and curators.Daniel is represented by Milani Gallery Brisbane.

The Value of Art links the economy and value of art with the economy of currency and value of attention. An interactive work, the value of the work increases exponentially with viewer involvement. Two historic paintings in gilt frames; a traditional cat portrait and the portrait of a lady have been outfitted with technology that tracks the number and length of time a viewer looks at each painting. Every 10 seconds from a viewer adds one euro to the value of the painting. The ever-increasing value is then printed out on scrolling, paper receipts. 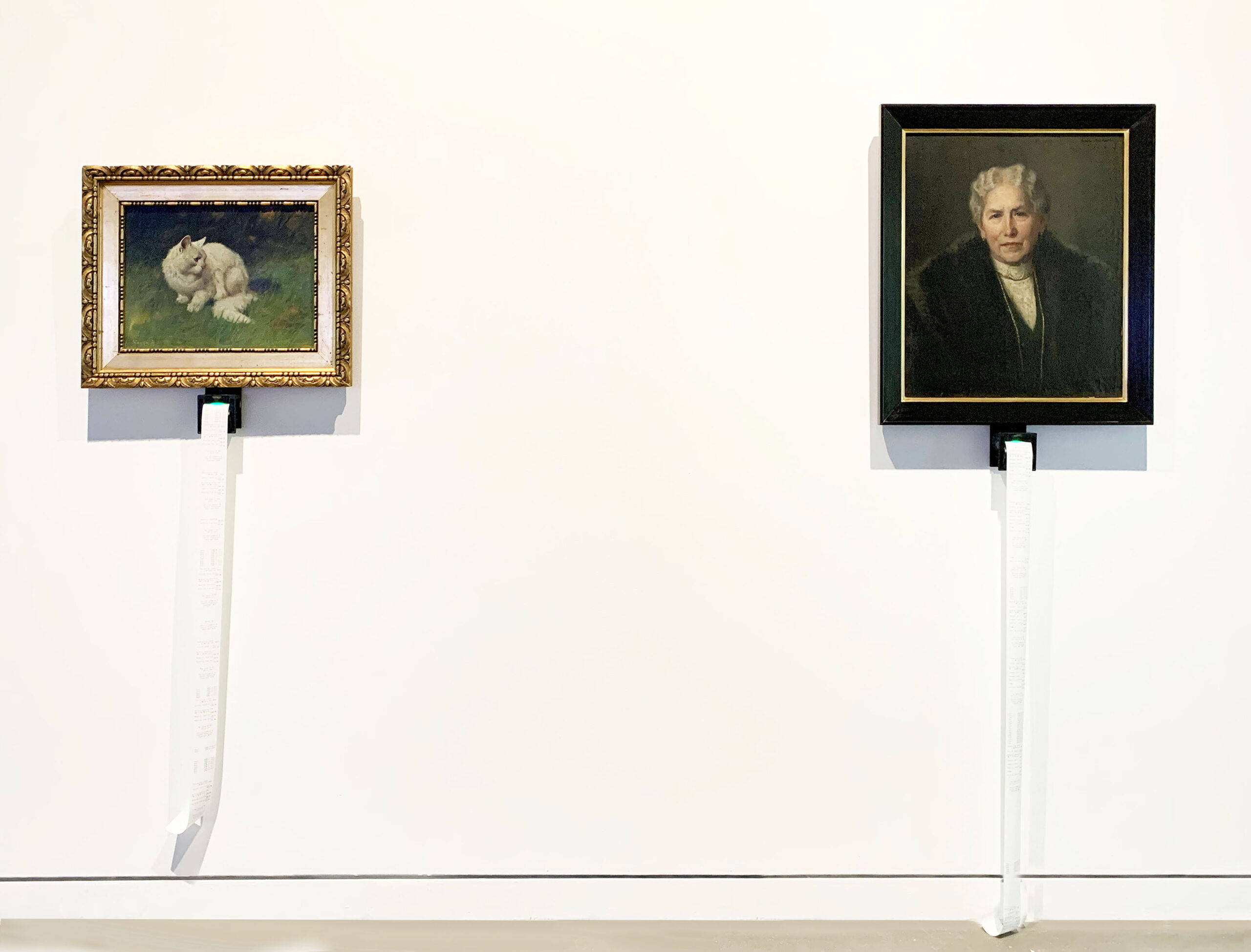 Christa Sommerer and Laurent Mignonneau are media artists working in the field of interactive computer installation. They are Professors at the University of Art and Design, Linz Austria where they head the Department for Interface Culture at the Institute for Media. Previously Professors at the IAMAS International Academy of Media Arts and Sciences in Gifu, Japan and Researchers and Artistic Directors at the ATR Media Integration and Communications Research Lab in Kyoto Japan. They were Visiting Researchers at the MIT CAVS , the Beckmann Institute and the NTT-InterCommunication Center, Tokyo. Sommerer studied biology (botany) at the University of Vienna and modern sculpture Academy of Fine Arts in Vienna (MFA). Mignonneau studied at “Ecole des Beaux Arts”(MFA) in Angouleme, France. Both completed their PhD degrees from CAiiA-STAR, University of Wales College of Art, Newport, UK and the University of Kobe Japan, respectively. They have published numerous research papers and have lectured extensively at universities, international conferences, and symposia. Sommerer has organized workshops and sessions at international conferences and is International Co-editor for the LEONARDO Journal, MIT Press.
They have worked together since 1992. Their work has been shown in over 250 exhibitions world-wide and is permanently installed in connections around the world, including the Media Museum of the ZKM in Karlsruhe, Germany, the NTT-ICC InterCommunication Center in Tokyo, the Cartier Foundation in Paris, the Millennium Dome in London, the Tokyo Metropolitan Museum of Photography in Japan, the AEC Ars Electronica Center in Linz, Austria, the NTT Plan-Net in Nagoya, Japan, Shiroishi Multimedia Art Center in Shiroishi, Japan and the HOUSE-OF-SHISEIDO in Tokyo. They have won the "Golden Nica" Ars Electronica Award for Interactive Art, the "Ovation Award" of the Interactive Media Festival,  the "Multi Media Award of the Multimedia Association Japan and the” World Technology Award” in London.

Byron worked with an architectural firm located in Shenzhen, China, which specialized in digital visualizations of new luxury homes and condominiums for the North American market. Following a lengthy period of discussions, rather than commissioning a model for upscale housing, the artist requested an architectural rendering of the sky directly above the firm’s building. In exchange, the firm requested a payment it deemed to be of equal value to the monetary cost: 50 Facebook ‘likes’. The result of this trans-pacific business transaction is not a photograph but a virtual approximation of an atmosphere with billowing clouds. 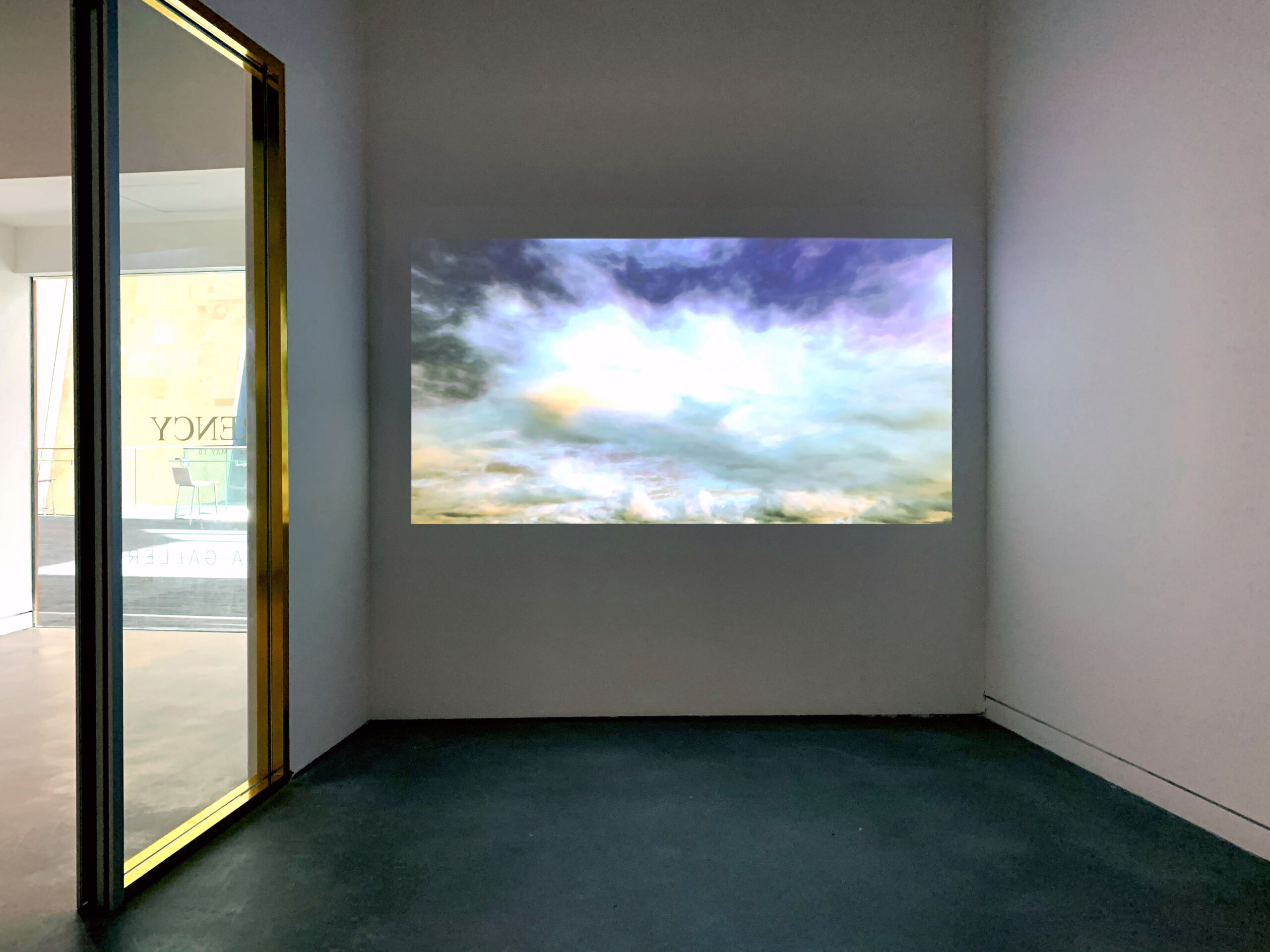 An artist and writer pf Chinese-Canadian & European descent, based in Vancouver, on unceded Coast Salish Territories, Peters’ practice critically engages labour and materiality in the context of emerging technologies, economic imaginaries, prison education, and the effects of gentrification and displacement. Peters’ solo and collaborative works have been exhibited at The Darling Foundry, Montreal; Para Site, Hong Kong; ICA Miami; The White Building, London; The Elizabeth Foundation for the Arts, New York; The Asian Art Museum of San Francisco, and others. His writings have appeared in Continent, SFMOMA Open Space, Cesura//Accesso, and Fillip.