..all of life together consists of a membrane around earth so thin that it cannot be seen edgewise from a satellite yet so prodigiously diverse that only a tiny fraction of species have been discovered and named. E.O. Wilson


Before biosphere, before life, there were only the non-living, abiotic factors and a world of water.
The three installations in aBIOTIC abstract and synthesize the ethereal, scientific and mysterious behaviours of water. Technology, sound, chemistry and time are used to further reveal or extend fundamental patterns and laws..
In this exhibition phases of water are a physical, chemical and structural material to be used as an expressive and conceptual tool: liquid, gas, solid; water, steam, bubbles, ice. We see water mirrored, suspended, projected and directed. Water is the surface, the object and the medium, over, through and around which play precise exchanges of light, movement and sound. Manufactured, incidental and composed sound is integrated into this watery fabric becoming a defining component of each installation.
The first work one encounters is The Long Now (2015), by Cologne-based Verena Friedrich. The intimate gallery, at the centre of the exhibition, contains this technology-based still-life, framed inside a clear perspex box, sitting on a table. A single, perfect bubble floats, persisting long after all other bubbles would have collapsed; the artificial atmosphere holds it aloft for a variable and uncertain length of time. Friedrich’s innovative use of technology & science greatly prolongs the normal life of each fragile sphere. But it eventually succumbs. The technology that produces the bubble and evacuates the atmosphere is triggered again and again; the brief, violent sound of working technology...followed by... the wonder. The work builds on a long art tradition of depicting soap bubbles in still life & portraiture. Known as Vanitas, the bubble serves to remind us that life is transient and our demise is certain.
Spanning another isolated, gallery space is Sky (2022-23), by Paris-based LABOFACTORY. Jean Marc Chomaz, Laurent Karst, Filippo Fabbri (composition) and Greg Louis, all currently reside in Paris. Sky is a kinetic, sculptural composition framed inside a long, raised, rectangular tray. This landscape with sound relies on the complex technological manipulation of steam or mist to produce intentional, ever-changing patterns and behaviours evoking a changing timeline of sky or ocean currents. A digital soundscape unique to New Media Gallery will be composed by Filippo Fabbri in the week leading up to the exhibition in response to this moment in time and the surrounding environment.
The largest gallery contains Infra/Supra (2016/2022) by Icelandic artist, Finnbogi Pétursson. Spanning one wall is an expansive, shallow, ground-level pool, filled with water and black ink and subjected to a precise calculation of sound vibration and light. The resulting hypnotic soundscape incorporates a series of speakers delivering the equivalent of three hertz of composed, sound vibration over and into the planar water surface. The pulsating waves generate a series of intentional, ever-expanding concentric circles and patterns on the water surface. Lighting projects these patterns onto the wall as moving tidal lines and shadows, or ‘drawings’.
Three remarkable physical art environments. Durational works that encourage us to observe emergent behaviours, causal effects and interrupted processes. Conceptually rich, they convey primordial beginnings and landscapes, environmental systems and conditions, a world or life held in fragile balance, and perhaps the potential for technology to affect positive change.

A soap bubble usually remains stable for only a few moments – it is a perfectly formed sphere with an iridescent surface that reflects its surroundings. As one of the classical vanitas symbols the soap bubble traditionally stands for the transience of the moment and the fragility of life.
THE LONG NOW approaches the soap bubble from a contemporary perspective – with reference to its chemical and physical properties as well as recent scientific and technological developments.
THE LONG NOW is aimed at extending the lifespan of a soap bubble, or even to preserve it forever. Using an improved formula, a machine generates a bubble, sends it to a chamber with a controlled atmosphere and keeps it there in suspension for as long as possible. The project is presented in the form of an experimental set-up in which the newly created soap bubble oscillates permanently between fragility and stability.

Verena Friedrich/heavythinking.org
Verena Friedrich is an artist creating time-based installations in which organic, electronic and sculptural media come into play. Theoretical research and practical hands-on experiments are the starting points of her artistic work.
Furthermore, she is interested in direct interaction with scientists and hands-on work in the bioscientific laboratory. She was an artist in residence i. a. at “SymbioticA – Centre of Excellence in Biological Arts” at the University of Western Australia and at the Max Planck Institute for Biology of Ageing Cologne in Germany.
Verena Friedrich´s projects have been presented internationally in the context of exhibitions, media art festivals and conferences. She received the International Media Award for Science and Art from ZKM Karlsruhe 2005; a special mention in the VIDA 13.2 Art and Artificial Life Awards; an honorary mention in the Prix Ars Electronica 2015; a jury mention in the Japan Media Arts Festival 2015 and the Transitio_MX award in 2017.
In recent years she has been teaching at the University of Art and Design Offenbach and the Bauhaus University Weimar, both in Germany. Together with two other colleagues she is currently running the „exMedia Lab“ (her focus being on DIY technologies, biological and ecological arts) at the Academy of Media Arts Cologne.

Realised within the framework of EMARE Move On at OBORO’s New Media Lab and a residency at Rustines|Lab, Perte de Signal, both in Montréal, Canada. With support of the Culture Programme of the European Commission, the Goethe Institut, the Conseil des arts et des lettres du Québec and FACT.

SKY questions our relationship and responsibility towards natural phenomena in the sky such as cloud formation and flow wind dynamics water vapour formation and condensation absorption transmission refraction and diffraction of light. These phenomena are materialised by a layer of mist animated by mobile and ephemeral spectral and mucilaginous forms in an unusual landscape. Indeed the installation transposes natural phenomena by reversing the reading direction. For example light does not come from above but from the ground and the cloud mass moves along a narrow line accentuating the perception of movement and speed. Thus the unfolding imaginary space is rather musical than choreographic. The mist then behaves like a sound material made of textures and rhythms. The substance whose materiality is uncertain changes texture and moves in response to the movements of the public around the installation. The sound material is structured around two main poles: an organic pole with a positive connotation and an industrial pole with a negative connotation. Humans interfere on the sound matter by polarising it in synchronisation with the behaviour of the fog thus transcribing different combinations of positive and negative human actions. SKY is then designed to offer a complex sensory experience ranging from pure aesthetic contemplation to empathic participatory understanding and questioning of the interactions between man and nature. 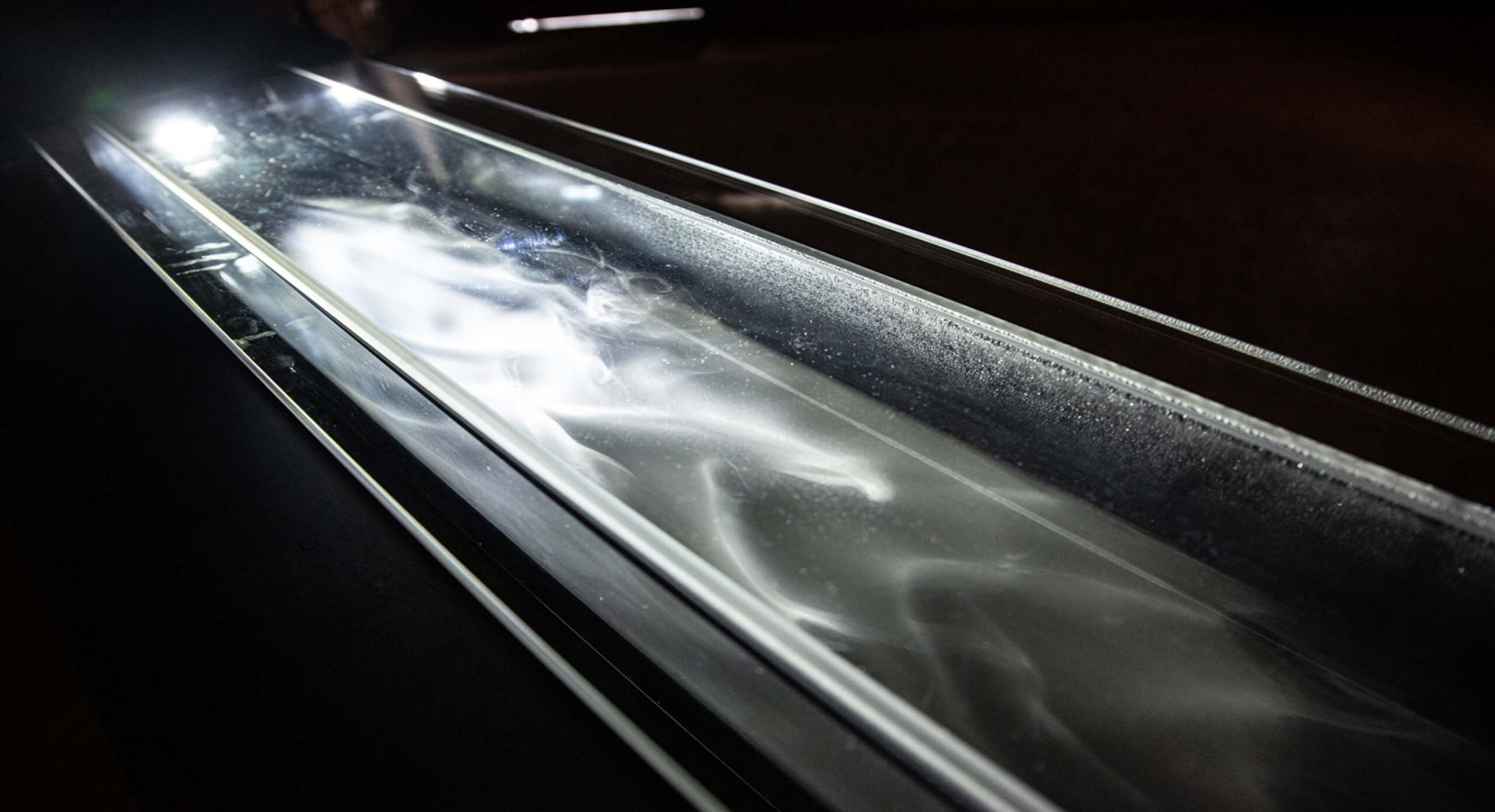 Infra - Supra has a long shallow pool of water on the ground with three equidistantly placed small speakers just above the water’s surface. The speakers repetitively deliver the equivalent of three hertz of sound onto the water below. These recurring sound waves generate expanding concentric circles in the pool. Via strategically placed lighting, the patterns on the water then project onto the wall in the form of shadows and create a fluid, animated dance, which is reflected again on the water, resulting in a quasi-infinite interfusion of below (infra) and above (supra). The central wave pattern is mirrored symmetrically on the wall, creating a billowing flame-like shape that swells and deflates. At times all three speakers pulse at once, causing three sets of intersecting patterns; at other times one or two speakers remain silent and the wall above them remains empty. To the visitor, the three-hertz sound waves register as a barely audible humming and are more felt as a pulse than heard. It’s this exact frequency that mimics the one of the brain in a restful state, and, together with the visuals, it provides the essentials for a meditative trance. (Scott Turri) 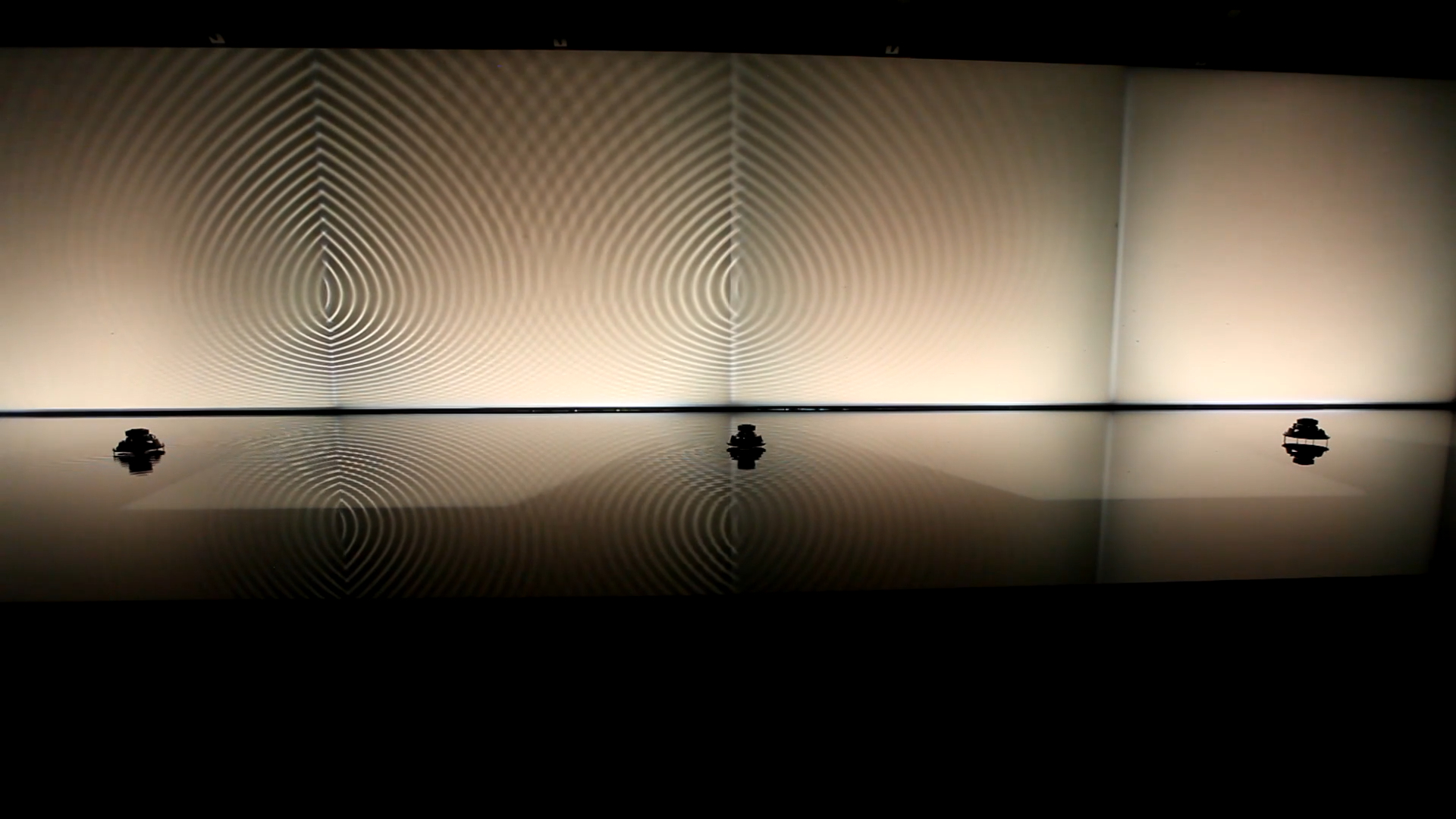 finnbogi.com
Finnbogi Pétursson (b. 1959) one of Iceland’s most prominent artists studied at the Icelandic College of Art and Crafts and the Jan van Eyck Akademie in the Netherlands. His innovative and eccentric oeuvre hinges upon the conceptual treatment and fusion of sound space and material. Finnbogi’s work often uses implements that produce electronic or acoustic sounds to form sculptures themselves. Many of his installations bridge contemporary technology and elemental phenomena. His work also evokes experiences that cannot be attributed to visual or auditory perception but rather a combination perhaps transcendence of the senses. Exhibited around the world Finnbogi’s works are found in several international public and private collections. He represented Iceland at the Venice Biennale in 2001 with his monumental sound installation Diabolus. Collections include TBA21 Vienna Michael Krichman and Carmen Cuenca Collection USA Malmo KunstMuseum Sweden Nordiska Akvarell Museum Sweden Reykjavik Art Museum Iceland and the National Gallery of Iceland. In Iceland his permanent installations can be seen at Landsvirkjun Vatnsfellsvirkjun (an electric power plant) Reykjavik University and at the headquarters of Reykjavík Energy. Finnbogi is represented by BERG Contemporary Reykjavík and Persons Projects Berlin. Finnbogi lives and works in Reykjavik Iceland.

We recognise and respect that New Westminster is on the unceded and unsurrendered land of the Halkomelem speaking peoples.
We acknowledge that colonialism has made invisible their histories and connections to the land.
As a City, we are learning and building relationships with the people whose lands we are on.